You are here: Home1 / Rio de Janeiro2 / The Girl from Ipanema (The Movie)

By courtesy of Universal Music 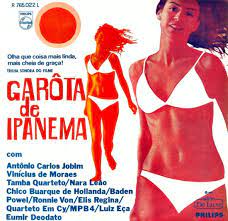 Garota de Ipanema is a film from 1967, directed by Leon Hirszman, which was inspired by the famous song. The idea to turn the song into a film came from the cinema novo auteur Glauber Rocha, but it is not a hardcore cinema novo film. Vincíus de Moraes was involved in preparing the script and in the production of the film.

The film follows the Ipanema life of 17 old Márcia, who is studying to get admitted to university, who is going to the beach, who is attending parties, who is bored with her family, who becomes intersted in various men she meets and so on. At some of the parties we see an impressive line-up of musicians performing, as if it were one the gatherings of the Bossa Nova gang: Tamba 4, Nara Leão, Chico Buarque, Ronnie Von, Baden Powell, Vinícius de Moraes, Dori Caymmi. We also get glimpses of Ruben Braga, Suzana de Moraes, Dorival Caymmi, Pixinguinha, Maria Bethânia and Bené Nunes, among others.

It was a natural idea to offer the principal part to the real “Girl from Ipanema”, Helô Pinheiro; and actually she was offered the role. But as on other occasions, her husband and her father got in between. There seems to be a hint to this early in the film, where a film producer wants to shoot Márcia on the beach, but her somewhat possesive boyfriend intervenes and says no on her behalf.

On the surface, the Márcia lives a carefree middle class life, but at a certain stage she meets a photographer who gets her to reflect on which type she wants to be. Watching a candomblé ritual on the beach initiates a series of surreralistic scenes where she endures the anxiety of choosing her own way of life. Finally, during carnival – the existential challenges provoked by carnival is a recurrent theme in Brazilian songs and movies – she realizes (I think) that life simply is to mask as various persons.

Below you find the released soundtrack. All the music was recorded for the film. The songs are carefully chosen to underline certain points or moods in the film.

You can watch the complete film here:

The site uses cookies to be set on your device for various purposes.

Click on the different category headings to find out more. You can also change some of your preferences. Note that blocking some types of cookies may impact your experience on the websites and the services it is able to offer.

These cookies remember your choices when go from oner page to the next and so on. Thus, they provide continuity in your visit.

Because these cookies are strictly necessary to deliver a coherent experience of the website, you cannot refuse them without seriously impacting how the site functions.

You can however block or delete them by changing your browser settings and force blocking all cookies on this website.

These cookies track information about your browser that is used to statistically map the traffic on the site.

If you do not want that your visist to the site is tracked you can disable tracking in your browser here:

The site also uses different external services like Google Webfonts, Google Maps and external video providers. Since these providers may collect personal data like your IP address, it is possible for you to block them here. Please be aware that this implies that you cannot see maps or videos on the site. Changes will take effect once you reload the page.